How hexagonal shapes disrupted our “normal” way of thinking

Recently we had a retro for the QA division at Accuteque, to review 2022. Instead of using the standard templates online for retrospectives, we experimented with the hexagon-shaped stickies for the retro. This was a tool I had used in the Cynefin Basecamp course I attended earlier in the year. Hexagons are often found in nature, from honeycomb structures to the compound eyes of some insects. Beehives are made of hexagonal cells, that let the bees build stable structures with the least amount of wax. Hexagons can be connected in many different configurations. They are capable of tessellating, meaning that they can be repeated and fit together perfectly with no gaps or overlaps, and create complex patterns.

So how did hexagons make our retro different? When I have done retros with rectangular stickies, this inevitably led to two things — classification and ranking. This is because the perpendicular lines automatically drive us to think in terms of tables, rows and columns, 2×2 matrices, etc. Using the hexagons appeared to disrupt this way of thinking in our retro. It helped us cluster items in more than just “relatedness” but also in multiple directions. For example a “Stop” item could be connected to a start item on one edge, another “Stop” item on another edge, which may in turn be connected to two other “Continue” items, thereby growing the interconnected picture that we were building as a team. That a simple change in the shape of our stickies can change the way we think is related to embodied cognition — we are not abstract brains in jars, our thinking is a result of the way that our bodies are shaped and the environment around us. For example of the shape of our bodies, the fact that we have front-facing eyes gives us concepts such as looking ahead and hind-sight. If we had compound eyes like flies, how would we think of peripheral vision? Would we be less or more inclined to “tunnel vision” and “focus”? If we had more than two hands (think eight like an octopus), would we still retain the binary thinking of right and wrong, good and bad, black and white?

For the things around us — when the pinnacle of technology was steam engines and mechanical automation, the models for how our brains worked were also “steampunk” in terms of gears and components working together. When we began to use computers, the field of psychology began to use an information processing model to think of human behaviour — the output (behaviour) being a factor of the input (stimulus) and programming (conditioning, for example). This was when computers had terminals to input data, and screens / printers to output results. More recent psychology approaches think of a person as a sum of not just the above parts, but also all the influences of the social, economic, political processes around them. Is it is a coincidence that it comes about at a time when our technology systems have increasingly porous boundaries and many variables that we cannot control?

Which brings me to the reading recommendation! This post was prompted by the excellent trilogy by Adrian Tchaikovsky called the “Children of Time”. I only finished the final book in last night. The books in this series each provoked unique questions about how we think, and whether what we understand as thought, sapience or even sentience would be the same for a different kind of animal? What about a different substrate entirely? With the increasing engagement with language and image AIs like ChatGPT and Lensa, the trilogy also takes the mind in the direction of the nature of intelligence, and whether we would recognise an another sentient intelligence when we saw it. Just like the hexagonal stickies, the branching out of thoughts from this series is not constrained by a linear imagination. So I heartily recommend adding this trilogy to your vacation reading list — and let your imagination wander in fractal patterns!

Bonus — the image on the post, as well as part of the paragraph about hexagons were created by Canva’s AI tools!

This article was published on the beyond testing blog and has been republished with the author’s permision.

Tanushree Parial is our Head of Quality Assurance, to find out more about the author go to her profile here. 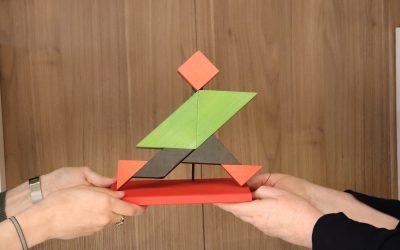 We use cookies on our website to give you the most relevant experience by remembering your preferences and repeat visits. By clicking “Accept”, you consent to the use of ALL the cookies.
Cookie settingsACCEPT
Manage consent

This website uses cookies to improve your experience while you navigate through the website. Out of these, the cookies that are categorized as necessary are stored on your browser as they are essential for the working of basic functionalities of the website. We also use third-party cookies that help us analyze and understand how you use this website. These cookies will be stored in your browser only with your consent. You also have the option to opt-out of these cookies. But opting out of some of these cookies may affect your browsing experience.
Necessary Always Enabled
Necessary cookies are absolutely essential for the website to function properly. These cookies ensure basic functionalities and security features of the website, anonymously.
Functional
Functional cookies help to perform certain functionalities like sharing the content of the website on social media platforms, collect feedbacks, and other third-party features.
Performance
Performance cookies are used to understand and analyze the key performance indexes of the website which helps in delivering a better user experience for the visitors.
Analytics
Analytical cookies are used to understand how visitors interact with the website. These cookies help provide information on metrics the number of visitors, bounce rate, traffic source, etc.
Advertisement
Advertisement cookies are used to provide visitors with relevant ads and marketing campaigns. These cookies track visitors across websites and collect information to provide customized ads.
Others
Other uncategorized cookies are those that are being analyzed and have not been classified into a category as yet.
SAVE & ACCEPT